that is where things go now.

IF - "rescue"
Originally uploaded by sn
I'm making weekly illustrations again. This one was done (pretty quickly) in a sketchbook during Drawing Night. If I work real fast then I can probably keep making these and not take a year between entries.

I was just thinking

then i remembered that this is livejournal

WELCOME BACK TO THE INTUITIVE KITCHEN

Peaches are only in season for a little while and canned peaches can go to hell. To hell! So, peach pie season. How do you make a good peach pie?

Crust: I used Bittman's from "Everything". For some reason, since he wrote that he went on to claim, in "Vegetarian Everything", that he doesn't like double-crust pies. What a goof! Anyway, 2 and a quarter cups all-purpose flour. 1 teaspoon salt. Two teaspoons sugar. Pulse them twice in the cuisinart.

The cuisinart? Yeah every time I made pie crust I did it by hand using the Alford and Duguid method (freeze the butter and grate it on a box grater -- pretty cool!) which kind of... didn't work. But the cuisinart is actually totally miraculous and I made a goddamn excellent pie crust for the first time ever.

IT TURNS OUT for pie crusts, you have to do it RIGHT. Which is to say: if it is acting up, or not coming together IMMEDIATELY and behaving TOTALLY WONDERFULLY, you're boned, and should start over. If the pie crust is going to work, it will do so from the very beginning. Sad news, but... it's also not hard. Listen up.

Pulse the dry a couple times, like I said. Add the butter -- one cup, nice and cold, chopped into SIXTEEN PIECES -- just by dropping it onto the mix. BY THE WAY did you put the PASTRY BLADE in the cuisinart? The soft, not a blade one? Hope so.

Okay now run the cuisinart FULL BLAST for TEN TO TWELVE SECONDS ha ha. No, don't time it. Watch it and when the butter sort of goes away -- blends in with and gets coated with flour in little pieces, you're done. It is OKAY to go a bit overboard! Not so much UNDERboard.

Put it in a COLD bowl, add six tablespoons water, and holy crap it's just making a beautiful perfect ball! Divide it into one ball 2/3 another ball 1/3 and put them in the fridge for a while. EVERYTHING you do with the crust should be on a COLD SURFACE. Run your rolling surface under a cold tap before each rolling! Keep your hands cool. Roll on a table that is NOT right next to your preheating oven. IF THE BUTTER TURNS LIQUID YOU'RE DONE FOR.

That's kind of what Bittman says but whatever.

Okay so whatever use the best peaches you can find. LEAVE THE SKINS ON. Don't boil them. Cut them into little bits and put them in a bowl and add some sugar, a bit of salt, a little nutmeg. You should probably add some lemon juice but I never remember to have a lemon when I make pie! SHAME ON ME!

Let them sit for a long time, and then put them in a colander over the SAME BOWL and let them sit EVEN LONGER. Look at all that juice! THAT JUICE RUINS LESSER PIES. BUT WE WILL FIX IT.

Put the juice in a POT and BOIL IT DOWN (slowly) to a THICK SYRUP then toss the syrup with the peaches and some tapioca flour. THE BEST PIE FILLING? YES but only until apples are in season.

Roll the crust out (this takes some practice and you are just going to have to work on it) and put it in the pan and put the peaches in it and stuff. SPREAD MILK ON TOP with a pastry brush. Good old milk slop it on. 450 for ten minutes, 350 for another 40 to 50. Here's how it should look: 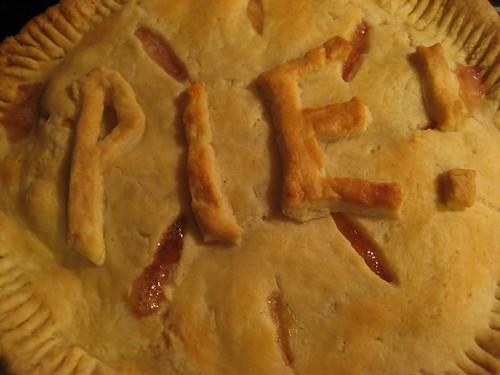 Here's how it should taste:

We had it with Mapleton's Organic Lemon Frozen Yoghurt. Lovely combination!

Here are the inspirations for the title of this post:
Don Caballero: Slice where you live like pie
Caribou (Manitoba): Lemon Yoghourt

For more pictures of the pie, and some other interesting things, there's a flickr set. Notable? A photo of the Cream And Tomatoes dish from a previous entry in this series in progress. With tomatoes from our garden yay!

Well I finally managed to draw Lisa successfully! If you've ever seen me draw you know how incredibly impatient I am.

So I just switched over to google reader from net newswire (because they turned off syncing and I lost my clippings) and decided it was time to Read Webcomics Via Feeds.

What a fucking hassle tracking down the RSS links on all the comics I read! I mean, okay people who draw comics are designers in one sense but they are for the most part not remotely interface designers or layout designers. Neither am I, really: the most recent redesign of Name Removed is based on my aesthetics and requirements but almost entirely the work of Lisa. But we SWEATED EVERY DETAIL.

I bought a beautiful ceramic deer skull from Karla and it arrived and we hung it and took pictures. 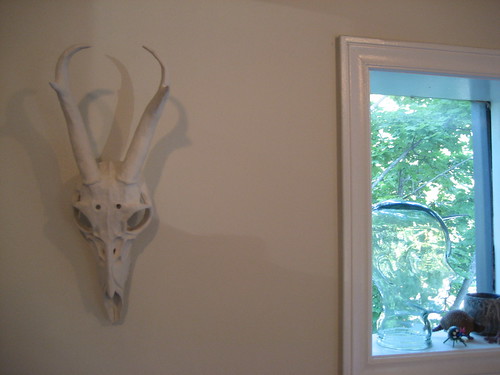 This is not the important interesting post I have been planning to write for some time now.

But I lurkin' on the somethingawful forums and someone just said something REALLY GOOD about the critical response to things like webcomics, which are free and easy and nevertheless (or because) have dedicated fans with particular and high expectations.

Dmitri-9 posted:
Onstad is just going on a magical realism detour. Watching a luchador helicopter walk to Mexico or a "Magreaux dog" fall over wasn't very entertaining but somehow I avoided crying about it like a colicky baby.

Tree Goat posted:
this is actually a pretty good criticism, since i think i'm just a few stages shy of object permanence in my piaget-style webcomic development. every time in the past when there have been isolated strips that were not funny they have almost always developed into a complete arc that turned out to be pretty good, and yet every time there aren't good strips i am like a child playing peekaboo, assuming that mommy is in fact gone forever.

I went to TCAF! Lisa and I waited in line to meet Paul Pope. He signed 100% for us, to both of us. We love Paul Pope.

He's one of those people who understands that there is bones + meat under the skin of a body and remembers to make things Grotesque Beautiful. I said "DO YOU REMEMBER ME?" ha ha

There was a signing like 10 years ago at the beguiling, him and Jay Stephens and I think Seth? And I shewed him a big page of CLASSIC TRANSMITTER that I had made with like a uniball pen. He said "You should learn to use a brush" and I said "My hands are not steady enough!" and he said:

"No one's hands are steady enough. Do it."

WELL I told him that and he was like "OH YEAHHHHHH" so I gave him one of my cards. 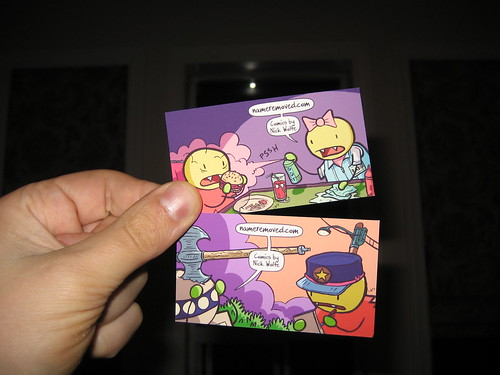 I made 2x3.5 business cards! Printed them on the new printer! Lisa cut them for me because I'm Not Safe.

I gave one to Paul Pope, both to Jeffrey Rowland, both to Ryan North (who got a complete set of the cards I did for Free Comic Day 2007 but lost them in his bathroom, he CLAIMS), one to Richard Stevens (whose ear I talked off, but he's SO NICE), one to Meredith Gran who is almost certainly completely awesome, one to john campbell (who signed a minicomic for me IN THREE-D) and and Karl Kerschl to whom I fangirl squealed because I got to flip through the A.C.C. book he draws in.

And I met other people too! It was so fun.

I hope one of them links to me. Ha ha ha. Mr. Stevens said "What sort of promotion have you done for your comic?" and I said "Well I gave you the card already right? That's... there you go."

And I warned Mr. North that I would complain to him about the ohnorobot api.

IT WAS SO FUN. I just realized that other than Paul Pope I basically only talked to webcomic people. Well, they were smilier.

oh and Lisa saw Cory Doctorow and said "GIVE HIM A CARD" and I was like "no way that's not him" and I insisted for so long that by the time I realized it probably was (many hours later) I couldn't find him and I was a chump.
Collapse